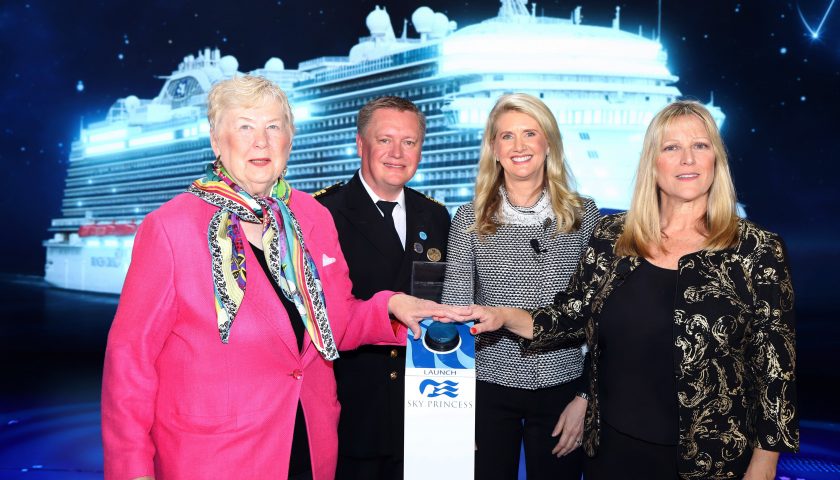 Northcutt and Hire blessed Sky Princess before signalling the release of a champagne bottle which smashed against the ship, officially welcoming the vessel into the line’s fleet.

Northcutt served as the first female mission control engineer when NASA made history with its mission to the moon. She earned the Presidential Medal of Freedom after her team’s calculations brought the crew of Apollo 13 home safely after they became stranded.

Hire served as Captain in the U.S. Navy reserve before joining NASA in 1989 as an engineer. She flew to space for the first time in 1998 as a mission specialist on the space shuttle ‘Columbia’ and for the second time in 2010 on the space shuttle ‘Endeavour’ to help assemble the International Space Station.

Additional women of NASA recognised at the ceremony included:

Jan Swartz, president of Princess Cruises, said: “As we celebrate our newest, most technologically advanced ship – one whose spirit of adventure and discovery match the grandeur of her name, Sky Princess, we also applaud the groundbreaking women of the U.S. space programme.

“And our godmothers, Captain Kay Hire and Poppy Northcutt, remind us all of what we can achieve when we aim for the sky.”

Sky Princess Captain Heikki Laakkonen also recognised two British officers who have achieved success in their leadership positions: chief security officer Susan Morgan MBE, who prior to joining Princess was the longest-serving female in the Royal Navy at 34 years; and second officer Kerry Ann Wright, who is also the ship’s ‘Madrina’, meaning she officially marked the first time Sky Princess touched water while under construction.

The ship is an evolution of the design platform used for its three sister ships: Royal Princess, Regal Princess and Majestic Princess. Her new features will also be on another sister ship, Enchanted Princess, which launches in Southampton in June 2020.

The new features include two ‘Sky Suites’, which have the largest balconies at sea and are centrally located on the top decks with 270-degree panorama views; the Phantom Bridge escape room; an enhanced Princess Theatre featuring production shows ‘Rock Opera’ and ‘5-SKIES’; and the ‘Take 5’ jazz lounge.

Sky Princess is the first purpose-built ship to offer the wearable OceanMedallion device to all guests. The Medallion, which is the same size as a 10p piece, delivers an entirely new level of service and creates a holiday that is more simple, effortless and personalised. Its enhancements include an expedited check-in process; touchless stateroom entry; the ability to order drinks, food and retail items from almost anywhere onboard; and a family and friends locator.

For more information or to book visit www.princess.com, call 0344 338 8663 or contact your local travel agent.

My husband was part of the design team of @pandocruises #Iona, back when he worked for CUK as Deputy Captain. People often forget the hard work that goes on behind the scenes to build these monumental vessels, but it’s great to see the finished result. https://t.co/k5dPmmywov
View on Twitter

. @MSC_Cruises_UK #MSCVirtuosa arrives in #Southampton ahead of #cruising resuming in the UK. https://t.co/d1ndDZnCYo
View on Twitter