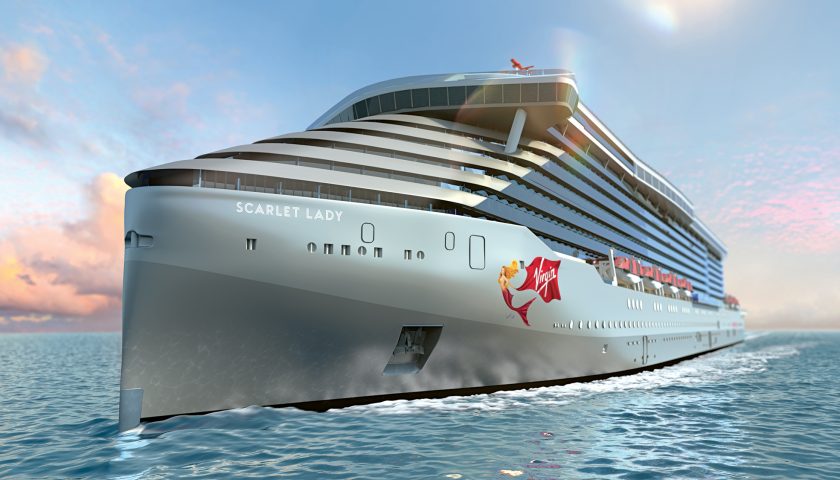 Sir Richard Branson and Virgin Voyages President and CEO Tom McAlpin recently announced the name of the first Virgin Voyages ship – Scarlet Lady. The name pays homage to one of Branson’s earliest Virgin Atlantic airplanes and the ship will bear the brand’s iconic mermaid image. Launching in Miami in 2020, the futuristic looking new vessel will carry 2,700 sailors and 1,150 crew.

The naming event took place during the summer in Genoa, where Scarlet Lady is being built. Several construction milestones took place on the same day, including the flooding of the ship’s dry dock and a steel cutting ceremony for the second ship, due to launch in 2021.

Who are Virgin Voyages?

If you haven’t heard the name already, Virgin Voyages is a global travel brand headed up by Sir Richard Branson. The company aim to create the world’s most irresistible holiday whilst maintaining one of the cleanest, sustainable fleets at sea. The brand believe the time to change sea travel is here. A number of design companies have been recruited to reimagine how sea travel looks and feels. The result will be stylish, contemporary venues with state-of-the-art technology, classic nautical accents and exciting entertainment options. There are currently three ships on order with the shipyard in Fincantieri, Italy.

What to expect on a Virgin Voyages holiday 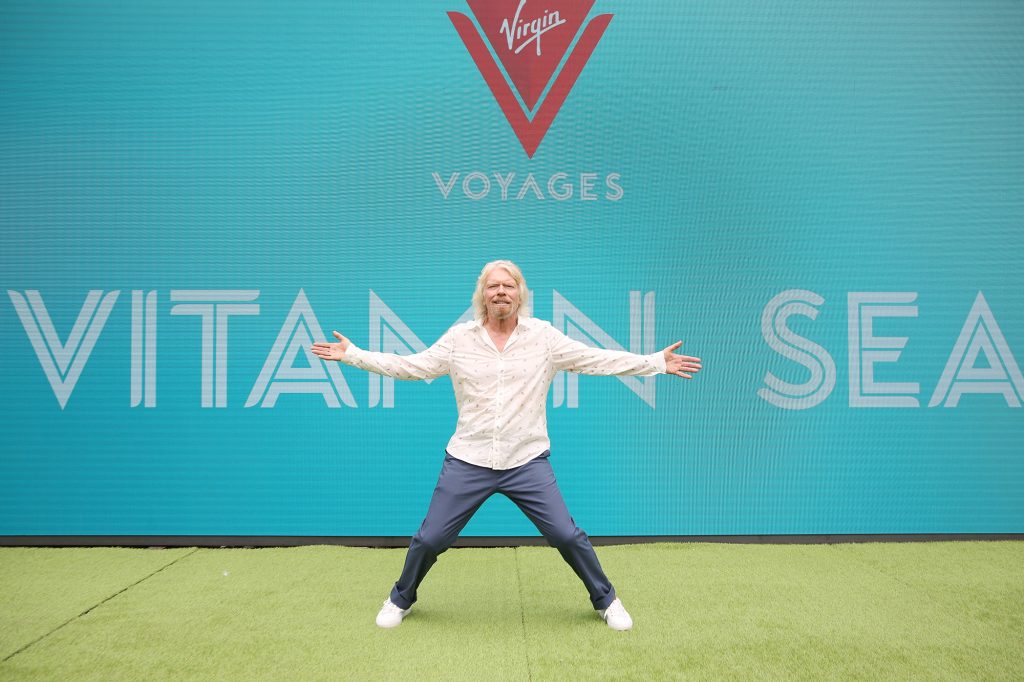 Sailors’ health and well-being is incredibly important to Virgin Voyages. The company’s well-being ethos, referred to as Vitamin Sea, is an important part of their ‘Epic Sea Change For All’ philosophy. Vitamin Sea ideology is inspired by the oceans and their importance in the health of our planet and our daily lives. Sailors will be encouraged to both detox and retox at a number of specialist onboard venues.

So far, the brand have released the following details of onboard facilities:

The Crow’s Nest is a secluded sundeck for sunrise and sunset yoga featuring 360-degree views with an adjacent elevated running track called The Runway.

With its Build, Burn, Bike and Balance rooms this is the place to go for on-demand fitness with state-of-the-art technology.

To work up a real sweat head to MyBeast, an artistic adult playground with a Venice-Beach like atmosphere. Cool off after your workout with a dip in the nearby well-being pool or enjoy a healthy juice at the Gym and Tonic bar.

Redemption will be the perfect place to rejuvenate. Immerse yourself in the hydrotherapy pool or cold plunge pools, relax on the quartz beds or switch off in the mud room and salt room. There will also be plenty of spa treatments to try, as well as a standalone salon and barbershop.

This aft-end outdoor lifestyle space will focus on comfort and social interaction. There will be a chilled out vibe similar to the chic seaside lounges of Ibiza. Expect lush foliage, comfy sofas and teak decking.

This classy outdoor lounge will feature circular loungers, giant umbrellas and dichroic glass. It will be reserved for suite guests only.

Dine in Pink Agave if you like high-end Mexican cuisine in an ultra-modern setting. Oversized banquets, metallic light fittings and intimate tables for two will make this a special dining experience.

Virgin Voyages’ signature nightclub was inspired by Branson’s history in the music industry. Deep emerald and aubergine décor will be mixed with gold accents to create the ultimate late-night venue.

Your senses will be put to the test at this trendy restaurant. The laboratory style eatery features sleek lines, shiny surfaces and scientific equipment. It’s dinner with a twist!

A ban on single-use plastics

All sailor-facing single use plastics will be banned including straws, food packaging, bottled water and shopping bags. Recyclable and reusable materials will be used in instead. Sailors will have access to complimentary filtered still and sparkling water at all bars and restaurants, as well as specially designed Natura filtered water stations throughout the ship.

Virgin Voyages are currently on a drive to recruit crew for their new vessels. They’ve created the ‘Scarlet Squad’ program aimed at recruiting, supporting and mentoring female shipboard talent in an industry that statistically has low numbers of females in leadership roles. Tom McAlpin said:

“I want all future crew to know that Virgin Voyages will create an onboard environment that is fair, inclusive and where everyone has an opportunity to reach their full potential.”

I am really excited to see Scarlet Lady’s development and I have a feeling that Virgin Voyages could revolutionise the way we look at cruising. I am really interested to find out whether any of their ships will sail out of Southampton in the future, as I think there are many features that will appeal to a British audience. It’s also really encouraging to see that they are thinking of new ways to be as environmentally friendly as possible, in an industry where this is notoriously difficult to achieve.