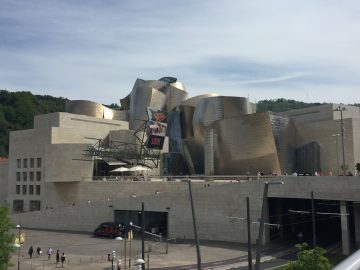 We recently visited the Spanish city of Bilbao on a seven-day Iberian cruise. Bilbao’s centre is located thirty minutes away from the cruise terminal. The port itself is actually in the pretty area of Getxo. Those who want to stay close by will benefit from a pretty marina with shops and restaurants, and a sandy beach within walking distance of the ship.

The drive to Bilbao takes you past some grand, Spanish houses and leafy avenues before reaching the busy city centre. Our shuttle bus stopped a five-minute walk from the Guggenheim, my destination for the day.

A building with a difference 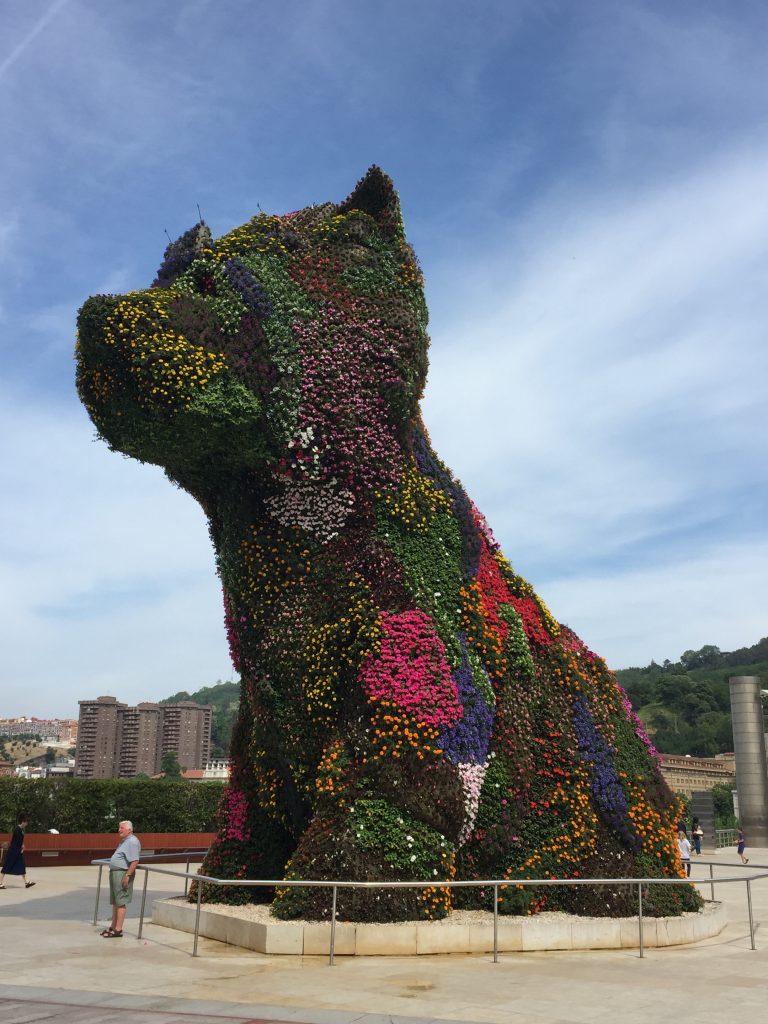 Like its more famous cousin in New York, the architectural design of Bilbao’s Guggenheim stands out. Sitting proudly at the edge of the Nervion River, the building is the epitome of modern art, offering a taste of what’s on offer inside. Opened in 1997, the museum cost US $89 million to build and was commissioned to help regenerate the city centre. It is one of the most admired works of contemporary architecture, with a curved exterior and walls of glass and titanium, which catch the light.

Outside the front entrance sits an enormous figure of a West Highland terrier, which is covered in bedding plants. Created by the artist Jeff Koons in 1992, ‘Puppy’ aims to instil optimism and security in those who view it. It also serves as a taster of what’s to come inside the Guggenheim Bilbao.

The art of modernism

Entry into the gallery is €16 for adults and an audio guide and map are included in the fee. Visitors are encouraged to work their way around the three floors, starting at the bottom, working their way up. The first exhibit I came to was Andy Warhol ‘Shadows,’ 1978-79. The exhibition showcases 102 canvases, which were painted with a sponge mop in varying colours. The artwork aims to draw people’s gaze to the light aspect of the painting. Warhol stated that this artwork was based on a photo of a shadow in his office. This is not the only Warhol in the Guggenheim. His iconic silkscreen repetitions of Marilyn Monroe, also feature on the third floor.

Floors one and two featured some very abstract modern art by a variety of artists, including Louise Bourgeois’ ‘Cells,’ a series of architectural spaces, which deal with different emotions. Other contemporary artists include Mark Rothko, Jorge Oteiza and Anselm Kiefer, which help make up part of the permanent collection. 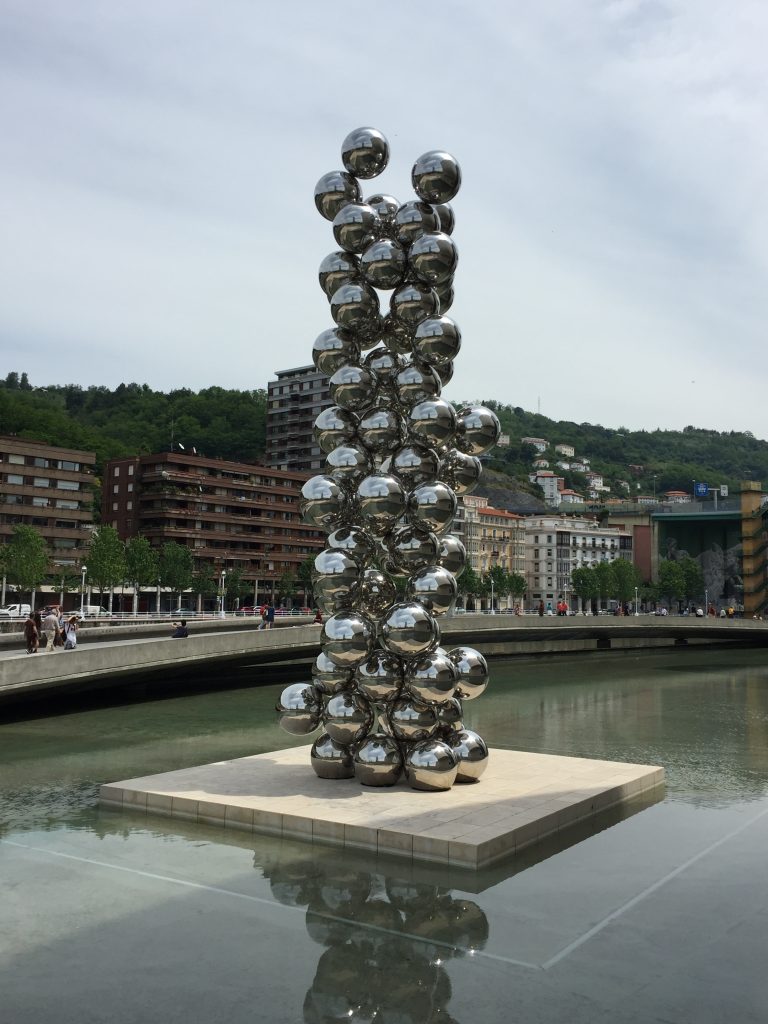 The highlight of my visit was ‘Windows of the city: the school of Paris, 1900-1945,’ on the third floor. This exhibit featured works by my favourite artist, Pablo Picasso but Gris, Duchamp, Chagall and Delaunay also feature. The exhibition charts key movements of modernism, including Cubism and Surrealism. After my visit to the museum (having had a quick look at more outdoor works of art), I walked along the river to a shopping centre I spotted on our way in. There weren’t many enticing shops near our shuttle bus drop off point, but the Centro Comercial Zubiarte had lots of stores and restaurant chains, perfect for a light lunch.

A friend later informed me that she found an excellent two-storey food market in Bilbao’s old town across the river, although it was a long walk from the Guggenheim. The old town, also known as Casco Viejo, is bursting with charming streets, lively bars and quirky shops. There’s plenty for keen sightseers, including a cathedral and weekly flea market. If you don’t want to do the long walk, there are City Sightseeing buses, which tour the city. If you want to go further afield you may want to explore the neighbouring towns of Guernica and San Sebastian, the latter is known for its lovely bay. 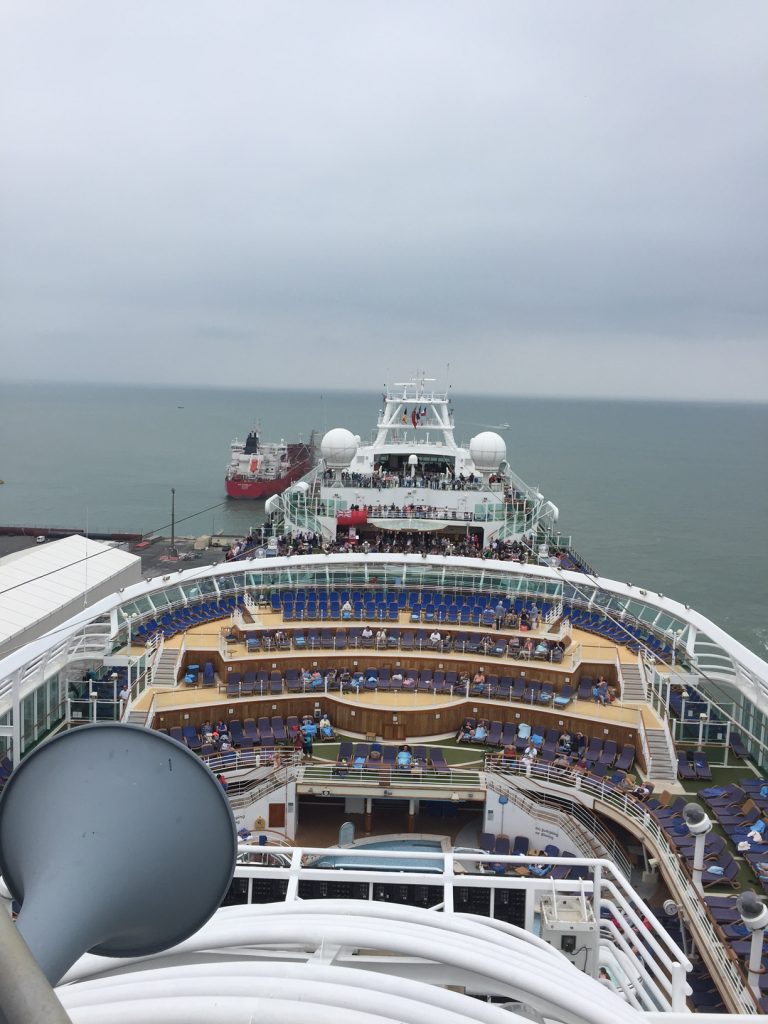