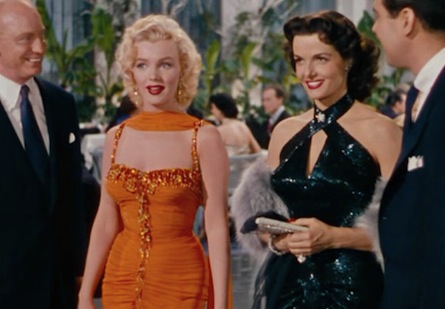 The glamour of cruising

Up until the end of the 1970s, cruising was viewed as a luxurious and glamorous type of holiday. It became a popular form of travel for royalty, politicians and movie stars such as Elizabeth Taylor and Marilyn Monroe. For passengers, it was an opportunity to showcase impeccable day dresses and fashionable evening wear on a daily basis.

A snapshot of this high-end glamour can be seen in the 1953 film Gentlemen Prefer Blondes. Anyone who remembers this film is unlikely to forget the dazzling evening gowns worn by Marilyn Monroe and Jane Russell. Set on a cruise ship, the film offers a great insight (albeit Hollywood style) into fashion at sea in the 1950s.

Today times are different and fashion and cruising are not two words we would often put together. For a long time this type of holiday has been seen as something exclusively for older people. This hasn’t been helped by hoards of people streaming ashore wearing bum bags and socks with sandals. There is nothing wrong with this and it is still prevalent in the cruising culture. But passenger style is starting to change, along with this outdated stereotype.

In 2016 cruise line Cunard hosted a Transaltantic Fashion Week on board its flagship the Queen Mary 2, to celebrate New York Fashion Week. The seven day transatlantic crossing included seminars, catwalk shows, dinners and exhibitions attended by the fashion glitterati. The event was so successful, that it returned in 2017 and featured designer Julien Macdonald. The ship also hosted a Marilyn Monroe themed cruise, which included an auction and a selection of personal items which belonged to the actress.

This event highlights that glamour and style has started to return to cruising. In recent years, ship’s cocktail parties have become the ultimate platform to show off slinky gowns, smart tuxedos and sparkly stilettos. These parties have become more of a fashion show than ever before, with women regularly asking each other ‘where did you get that dress?’ These events are also one of the busiest times for the onboard salons. People regularly pay to have their hair and make-up done professionally for the evening, as these parties are special occasions.

Different trends have also meant that over time, the styles of the 50s and 60s have come back in to fashion. The colourful dresses worn by passengers from Monroe’s era can once again be worn with pride. It’s not uncommon to spot an off the shoulder dress or a backless 1920s number, while sipping your glass of Prosecco.

It’s not all about the formal wear though. Passengers have become so trendy on cruise ships, that even I am starting to feel really uncool. My husband and I were out on deck the recently, when I spotted a young group of female passengers (aged around 18). Sporting funky skirts, block heels and colourful crop tops, they were the epitome of cool.

So if you thought that fashion on cruise ships was just old fashioned and frumpy, think again. Times are definitely changing…