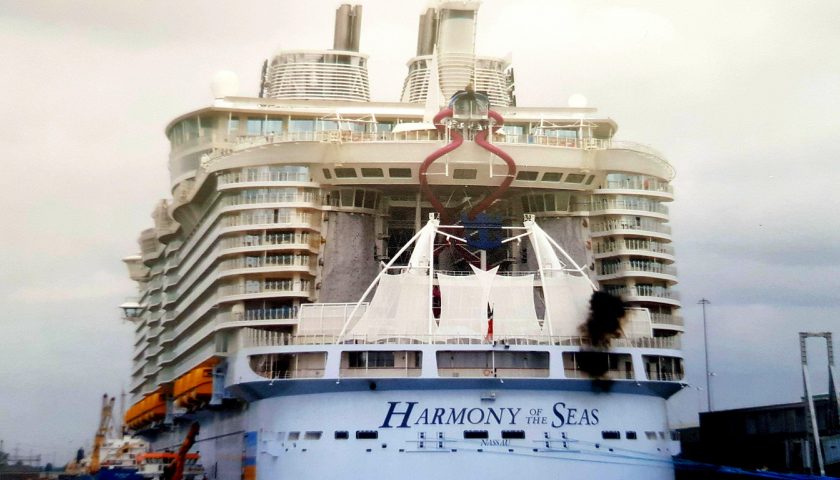 This is a guest post about Royal Caribbean’s Harmony of the Seas by my dad, maritime historian and owner of Cobwebs Ocean Liner Memorabilia – Peter Boyd-Smith. Dad has been on over 100 cruises over the years, as a passenger and guest lecturer. Both Mum and Dad have sailed on a number of cruise lines, including Cunard, Celebrity Cruises, Princess Cruises, Saga, Fred. Olsen Cruise Lines and P&O Cruises. 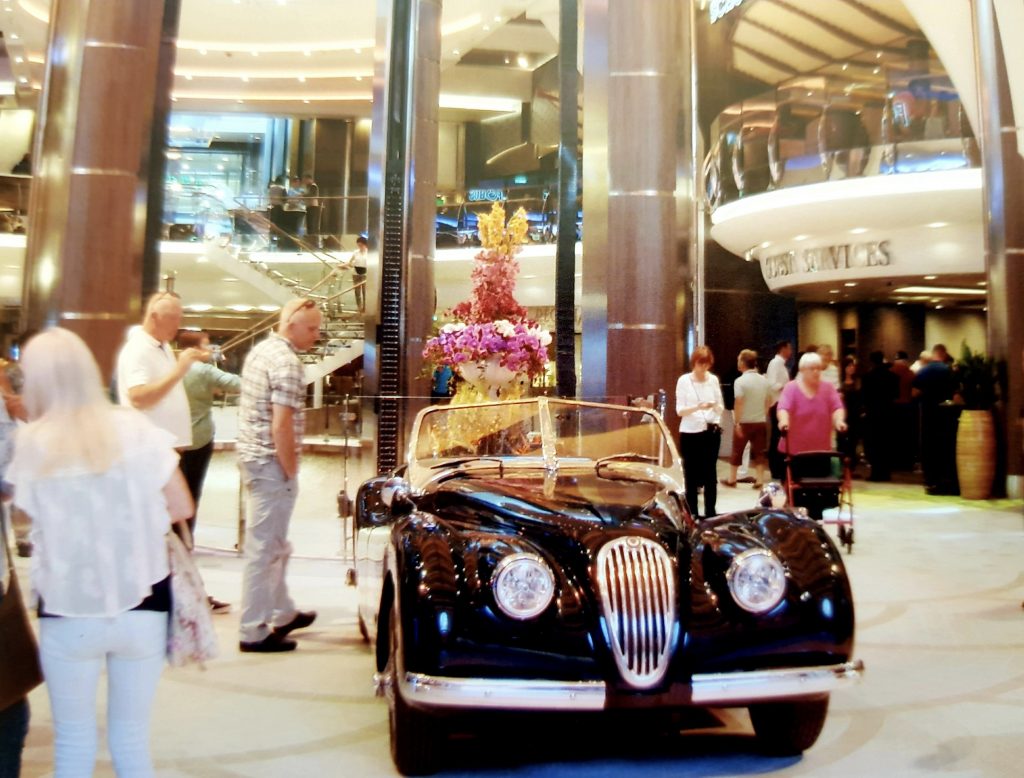 My wife and I booked a three-day cruise on board Royal Caribbean’s Harmony of the Seas, which was the largest ship in the world at the time of sailing. This Oasis-class ship was built in 2016, measures 1,188 feet in length, weighs 227,000 GRT and cost US $1 billion to build. Harmony of the Seas has over 2500 staterooms, 2100 crew and a maximum passenger capacity of 6780. She features numerous swimming pools, 18 decks, a robotic Bionic Bar, over 10,000 plants and an AquaTheater.

Boarding Harmony of the Seas was a great surprise. Most cruise ships would take 45-60 minutes to board. This ship, with twice the number of usual cruise passengers, took 15 minutes from entering the terminal until boarding the ship. The organisation was excellent. When visiting our only port – Cherbourg – the process of getting on and off the ship was also smooth and very efficient. 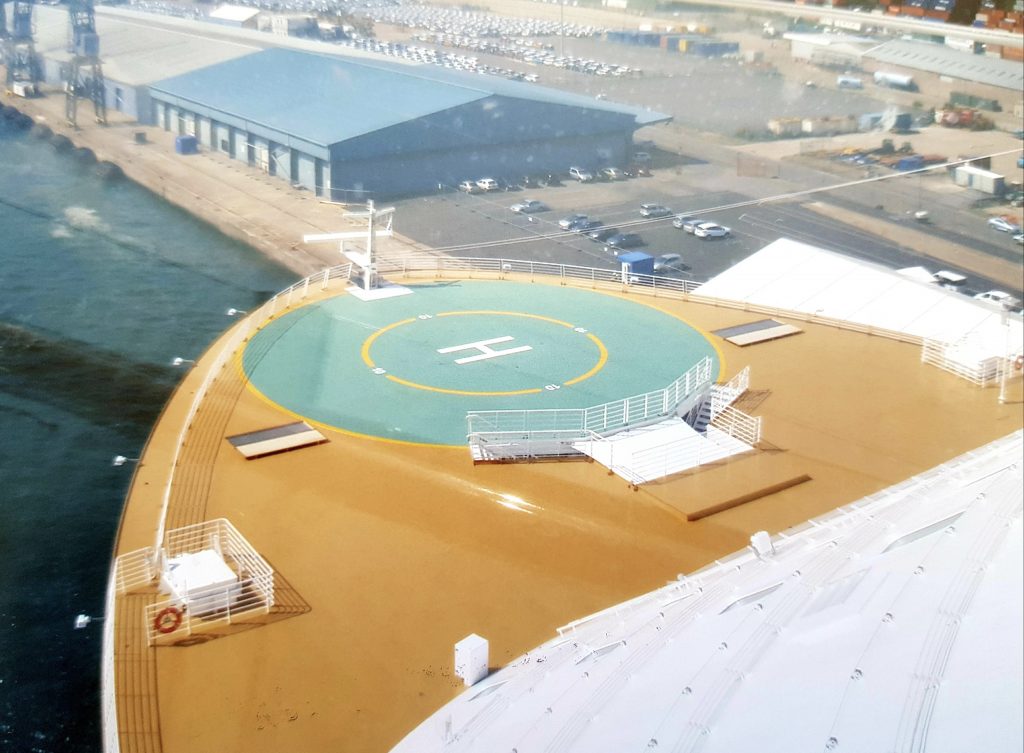 Our stateroom was 579 on Deck 9, which overlooked Central Park. We had a large picture window without a balcony and you couldn’t hear any noise from outside. The park is a feature on a number of the larger Royal Caribbean ships nowadays. Centrally located, the area is laid out as if it was a real park and is open to the elements. Balcony staterooms line the overhanging decks and the space is lit up in the evening. Central Park has a selection of small cafés and bars, along with seating.

Unfortunately we had to keep the curtains closed most of the time as the staterooms opposite could see into ours, which was a bit of an issue. Our stateroom was very clean and modern, which of course is one of the perks of a newer ship. We didn’t see our steward at all during our stay, despite the room being made up daily.

You aren’t short of places to eat on Harmony of the Seas. As well as the main dining room and buffet, guests can dine at a Mexican restaurant, pizzeria, hot dog house, diner, grill, cafés, a bistro, two named chef restaurants, a Japanese eatery and a multi-sensory avant-guard venue called Wonderland. We ate daily in the American Icon Grill on Deck 3, which was very busy but the service was friendly. We also tried out Johnny Rockets, where I had a burger which was delicious. The restaurant is fitted out as a 1950s diner and can be found along the Boardwalk. A small cover charge is required to dine there. Overall the food on Royal Caribbean was average, and was no better or worse than the likes of P&O Cruises. The main dining menu offered international cuisine similar to that on other cruise lines, but there was a good selection of dishes to choose from. We did like the choice of free snacks and soft drinks on offer during the day.

The Boardwalk is one of the main hives of activity and this is where we found shops, cafés (Starbucks), restaurants, the carousel and an arcade. The area has a bit of a shopping mall feel to it and it is easy to see the American influences that Royal Caribbean are known for. Like Central Park, the Boardwalk has balcony staterooms that surround it. We did find that there weren’t that many shops on board which was interesting. At the end of the Boardwalk on the open deck, we found the AquaTheater and the two climbing walls. The AquaTheater was closed during our cruise but we did have a go on the carousel.

Royal Caribbean are known for their impressive entertainment shows. From Broadway musicals, comedy and acrobatics to aqua shows and dancing on ice, there is variety in abundance. If you wanted to see a show, you had to book at various booths on the main entertainment decks, although I understand you can pre-book shows on board Harmony of the Seas before you cruise, online. We went to the ice show on the first evening, which was one of the most fantastic shows we have ever seen. There were two sittings for this show and it lasted around 45 minutes. We also saw a performance in the main theatre, which is an impressive space with good visibility from most angles. It’s worth mentioning that you don’t need to go to a show in the evening, as there is enough going on elsewhere on the ship to keep you entertained. We visited a couple of bars in the evenings, and we even had a look at the robotic arm in the Bionic Bar from a distance, out of curiosity.

The ship had two huge rock-climbing walls, a zip-line, surf simulator, ice-skating rink and the largest slide on board a ship (at the time) called the Ultimate Abyss. The slide spans 10 decks and features a 100-foot drop. As you slide down, there are small LED lights, then blackness, and then more lights appear until you hit the mats at the bottom.

Although she is one of the largest passenger ships in the world, Harmony of the Seas never appeared to have too many people in one place. The crew were friendly and helpful and it was only the bars that seemed crowded. There were no formal nights, so the dress code was casual with a ban on shorts and t-shirts in the dining venues during the evening.

A lot of passengers were in their 30s and 40s, often with children. There were also large groups of people travelling together, which may be due to the fact that this was a short weekend cruise. My favourite things about Harmony of the Seas were the ease of getting on/off the ship and the friendliness of the crew. I disliked the noise and lack of quiet space. Due to poor weather, it was difficult to get out on deck so it did get busy inside the ship.

Although we have been on many cruises, this was out first Royal Caribbean holiday and we were very impressed with the ship. However, in my opinion, this is a ship suited for families and young people. It’s not ideal for anyone who wants a peaceful cruise. There is a small library/card room but there aren’t many places to read quietly. Also it’s worth remembering the bigger ships have more restricted itineraries. It would be interesting to experience a smaller Royal Caribbean vessel, to see how the atmosphere, itinerary and entertainment differs to the Oasis-class.

Things to know before booking with Royal Caribbean:

Want to know more about Harmony of the Seas? Find out what it’s like to sail on the ship as a family, with this guest post by former cruise ship engineer James Allen.

Don’t forget, you can subscribe to keep up to date with all the latest The Cruise Blogger posts by filling out the box in the top right hand corner of this page.

My husband was part of the design team of @pandocruises #Iona, back when he worked for CUK as Deputy Captain. People often forget the hard work that goes on behind the scenes to build these monumental vessels, but it’s great to see the finished result. https://t.co/k5dPmmywov
View on Twitter
1
57

. @MSC_Cruises_UK #MSCVirtuosa arrives in #Southampton ahead of #cruising resuming in the UK. https://t.co/d1ndDZnCYo
View on Twitter
0
4