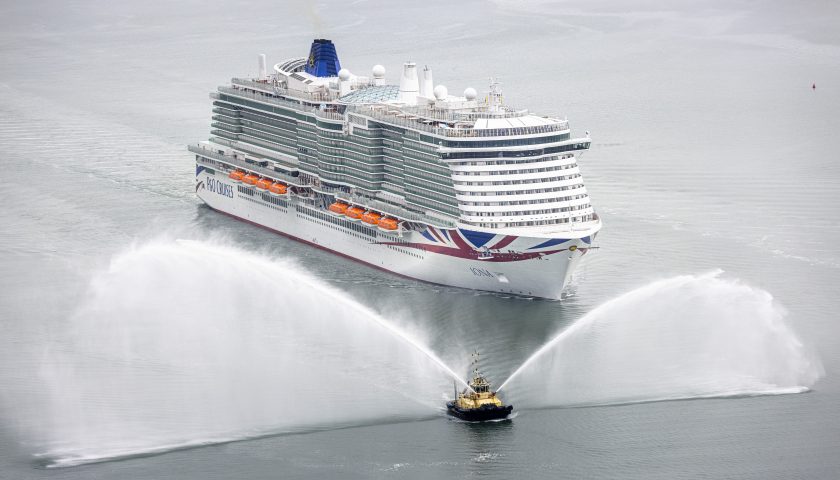 Britain’s largest and most environmentally-friendly cruise ship, P&O Cruises Iona, arrived into her home port of Southampton this morning ahead of tonight’s official naming ceremony.

Iona is powered by liquefied natural gas, ground-breaking for the UK cruise industry and one of the cleanest fuels in the world.

The ship will be named this evening in a glittering quayside ceremony at 9pm, hosted by Jo Whiley and broadcast to a “virtual” audience, the highlight of which will be Iona’s music director Gary Barlow performing a short set.

Dame Irene Hays, chair of Hays Travel, Britain’s largest independent travel agency, will name the ship and a specially produced Nebuchadnezzar (equivalent to 20x 750ml bottles) of Alex James’s Britpop cider will smash against the hull of the ship to bring it good fortune in the future.

Iona will have 30 bars and restaurants with many new speciality dining options including tapas from award-winning Spanish chef José Pizarro paired with wines selected by Olly Smith and a new Chef’s Table menu from Marco Pierre White. Entertainment venues include the first “SkyDome” – an extraordinary glass structure which will be a relaxed poolside environment by day and then transform at night into a spectacular venue with DJs, stage and aerial acrobatic shows.

There will also be the first gin still on a cruise ship, created in association with Salcombe Gin, distilling tailor made spirit on board. The gin’s maiden production will take place in Iona’s custom-made still named “Columba” and will be distilled, bottled and labelled on board.

P&O Cruises president Paul Ludlow said “It is a landmark day for both P&O Cruises and for the travel industry as a whole.

“We are on the cusp of a bright new beginning and Iona’s arrival into Southampton this morning is very visible evidence of this much anticipated future.

“Our guests are longing to get back to sea and Iona’s summer season of UK coastal cruises, including her maiden voyage on August 7 up to her namesake island of Iona, have seen overwhelming demand.”