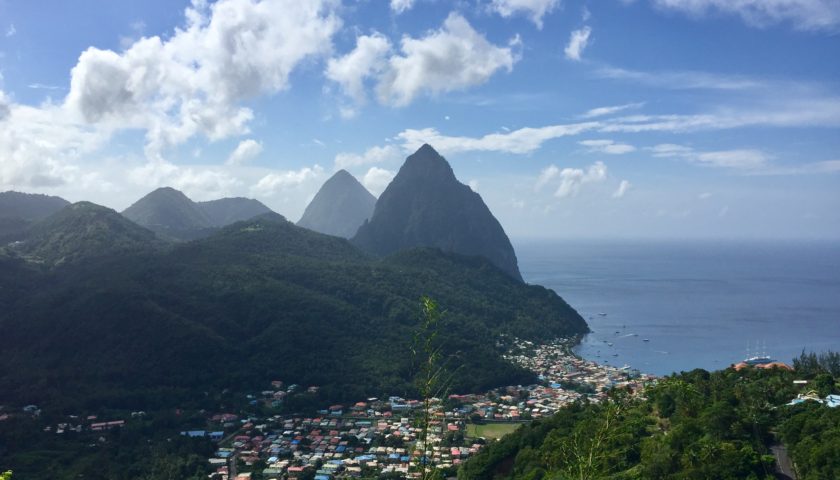 This is a guest post about St. Lucia by Sam Whiteside, Port Presenter with P&O Cruises. You can find out more about Sam at the end of this article. All photos were taken by Sam.

If there is one Caribbean island where I always find plenty to see on a cruise, it’s St. Lucia. I know that I need to visit many more times just to fit everything in. This avocado shaped island is one of the largest in the Lesser Antilles, with 232 square miles to explore. It has a mixture of French and British influence, due to the fact it has changed hands many times between the two nations. 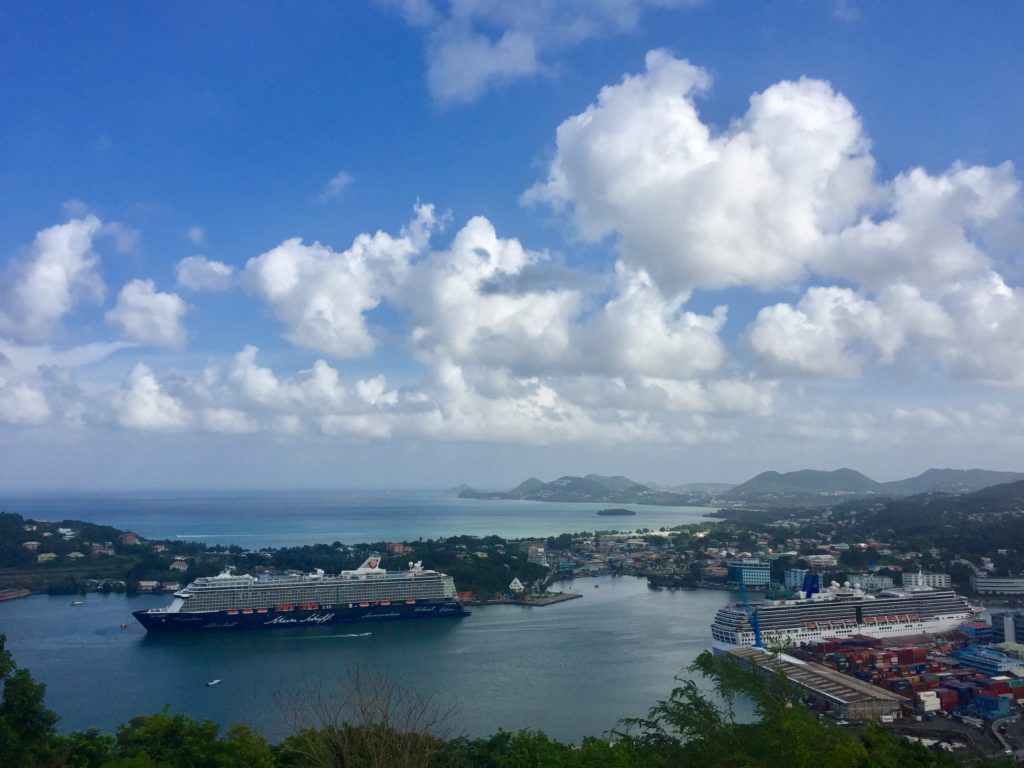 From a cruise ship perspective, docking in Castries (the capital of the island) is the main gateway to experiencing what St. Lucia has to offer. For me, this is somewhere you should really plan a day away from.

Castries does not have much to offer, but it has plenty of transport options, with taxi drivers willing to take you to all corners of the island. The only real thing that is worth seeing in the city is the cathedral. It is the largest of its kind in the Caribbean, at 200 ft in length and 100 ft wide. Apart from that, there is not much to do aside from browsing the shopping streets and the local market.

Gros Piton and Petit Piton are the names of the two volcanic spines that rise majestically 2000 feet out of the sea. They are situated to the south of the island and really are the signature of St Lucia. When you see these twin peaks appear out of the sea mist, you know exactly which island you are approaching. The Pitons are located near the town of Soufrière. Despite its short distance of only 25 miles (40km) it takes almost 1½ hours to access via the winding coastal road. You will pass by various picturesque fishing villages and banana plantations, nestled in the many bays and inlets along the west coast. 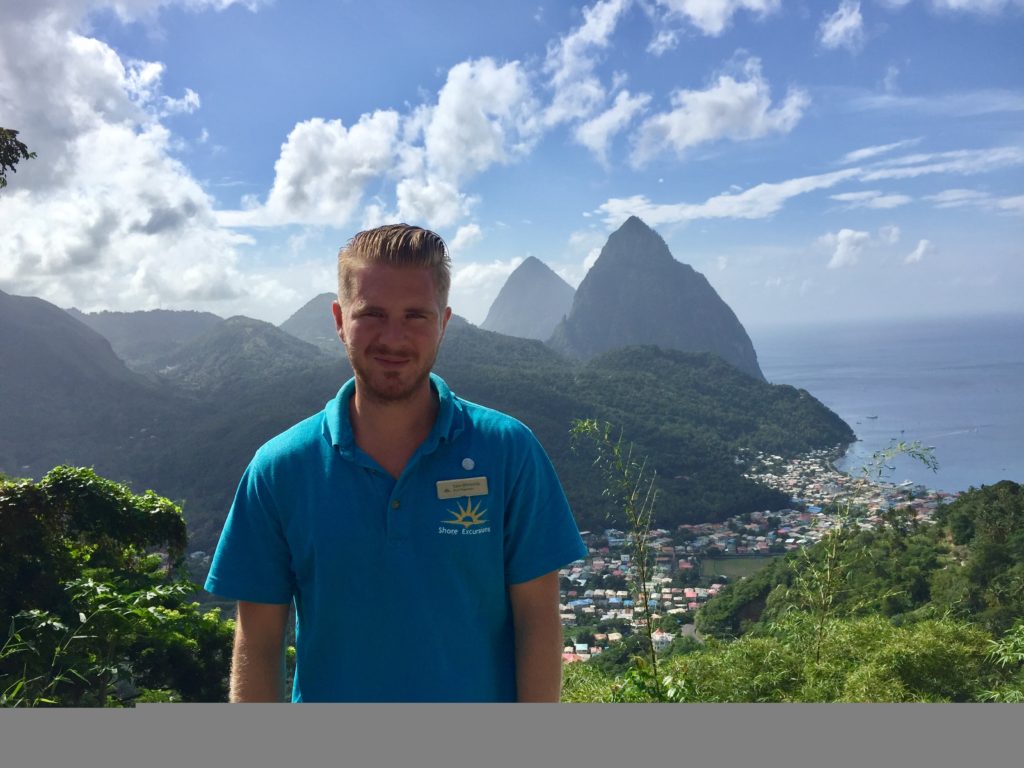 You will be blown away by the scene in front of you. As you turn a corner to overlook the town of Soufrière, there is a stunning backdrop of the majestic Pitons towering over it. There is currently a viewpoint being constructed, which presents a great vantage point for taking your photographs of the Pitons, taking in the full scale of them against the sea and the town. It is nice just to take a taxi to explore the area and enjoy all the things on offer in Soufrière. A taxi will cost approximately $40USD per person for a round trip, based on 4-6 people sharing. This price can be reduced depending on the number of people sharing the transport and it is negotiable with local taxi drivers in Castries. 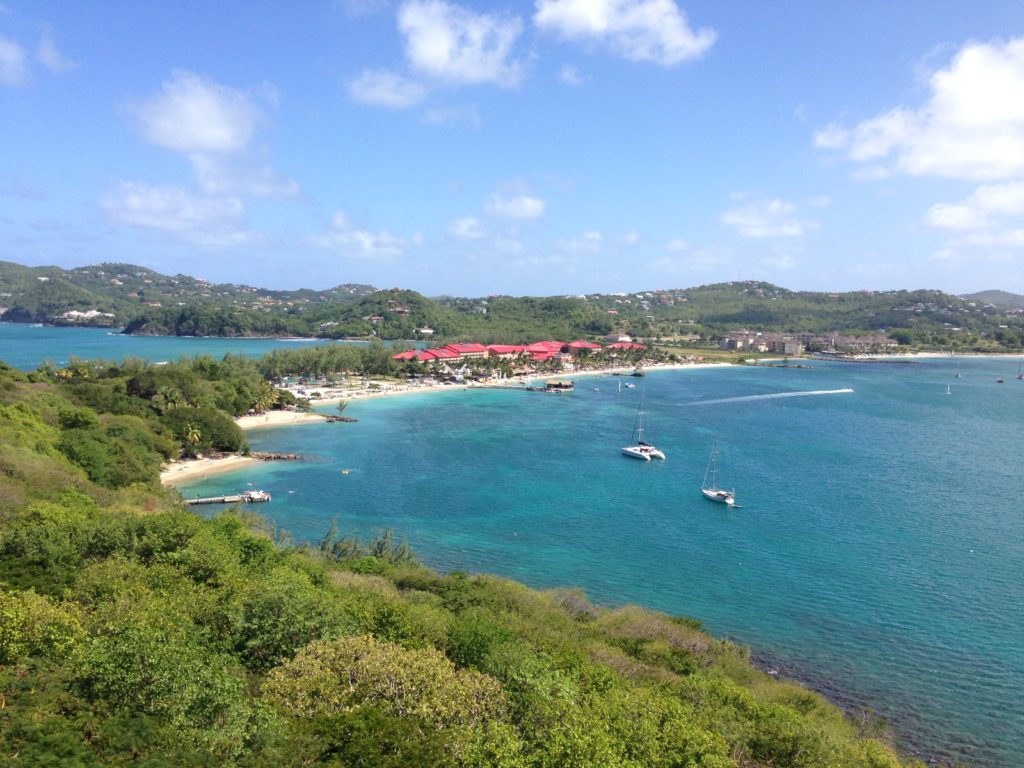 Pigeon Island National Landmark is heralded one of the most important monuments in St. Lucia’s history. It is one of my favourite places on the whole island for a number of reasons. It is a thirty minute drive north of Castries and offers you several different highlights across a 44 acre reserve. The island used to be separate from the mainland, but was connected with an artificial land bridge built in 1972 with dirt excavated to form the Rodney Bay Marina.

The island is a historic site as it was the location of the first Carib Indians on St. Lucia, after they displaced the Arawaks around 1000AD. They lived in caves along the island’s shoreline and foraged for plants and berries, whilst also hunting for fish and small animals and birds. Later on the first reported Europeans on the island were led by the pirate Francois Le Clerc (known as Jambe de Bois). He was reportedly the first pirate to have a wooden leg. He used the island as his base to attack passing ships in the 16th Century.

In 1778 Admiral George Rodney built a small fort on the smaller of the two peaks that form the island, whose ruins are still accessible today. Signal Hill is the higher peak of the two and to have a clear vision over the Caribbean Sea, Admiral Rodney ordered all the trees on the hills to be cut down. During this time the British built two barracks, a mess hall and a lime kiln, the ruins of which can still be seen and explored today.

Aside from the military ruins that form the history of the island, Pigeon Point also has two beautiful beaches on Rodney Bay. They afford sheltered swimming and snorkelling, snuba and seatrek (along with other water-based activities) can be enjoyed here. There is also a restaurant with a terrace and a bar, offering local cuisine and beverages. 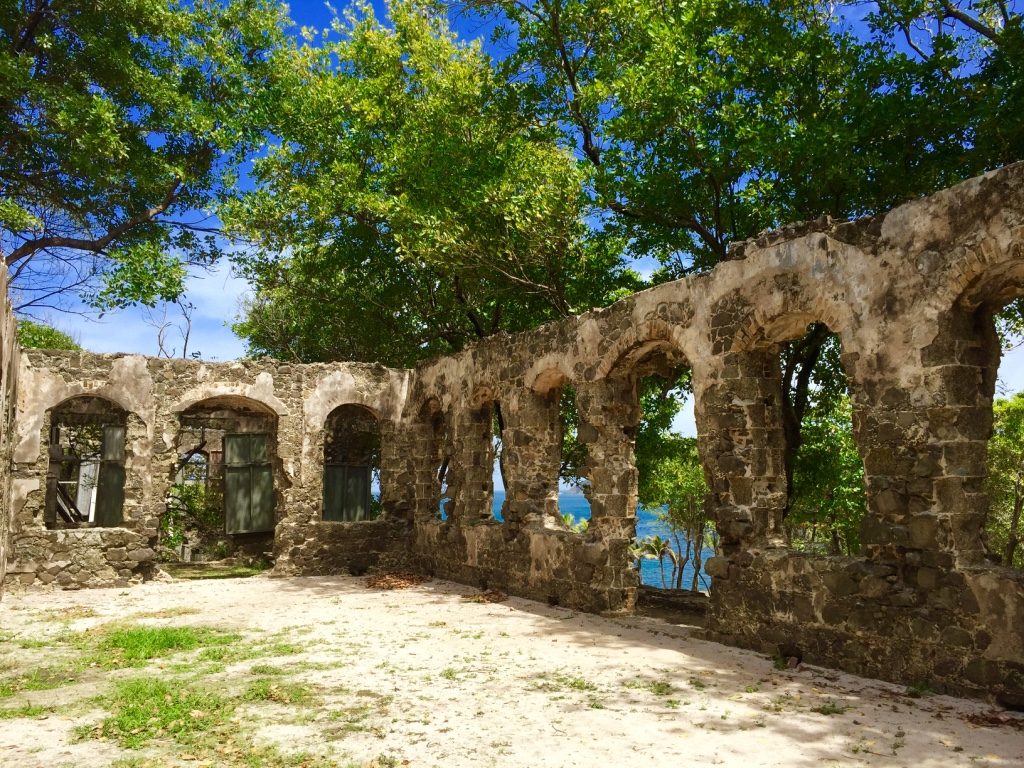 For me this is a place that you can spend a whole day, taking a look around the ruins, hiking up to Fort Rodney and Signal Hill, then cooling off with a dip in the Caribbean Sea. I also love to sample a local beer or rum punch over Creole infused dishes at the restaurant, hence why I have visited several times when I have been docked in St. Lucia. It is open to visitation 365 days a year and is US$7 for visitors to St. Lucia. A taxi to Pigeon Point will cost you approximately $7USD per person one way, which is what I paid last time I made the trip up in February 2016.

Castries does not have many beaches within a short distance. If you are willing to head further afield you can find some fantastic beach destinations with great swimming opportunities. Located in the area of Gros Islet on Rodney Bay, Reduit Beach (pronounced red-wee) is considered to be the best beach on the island. It is set in the area of Rodney Bay surrounded by the marinas, shops and restaurants of Rodney Bay Village. Considering this is the most popular beach for tourists and locals alike, do expect it to get crowded. You are also likely to get hassled by vendors along the beach, due to the amount of hotel resorts in the area. A taxi from Castries takes approximately 25 minutes depending on traffic, and costs approximately $7USD per person one way.

Located at the base of the La Sourciere Mountain, you will find St. Lucia Rainforest Adventure Tours. It is the island’s premier eco-adventure company and offers adrenaline experiences, relaxing canopy tours and active hikes, so people can truly experience the natural beauty of St. Lucia. It is located within easy reach of Castries, approximately 30 minutes by taxi. 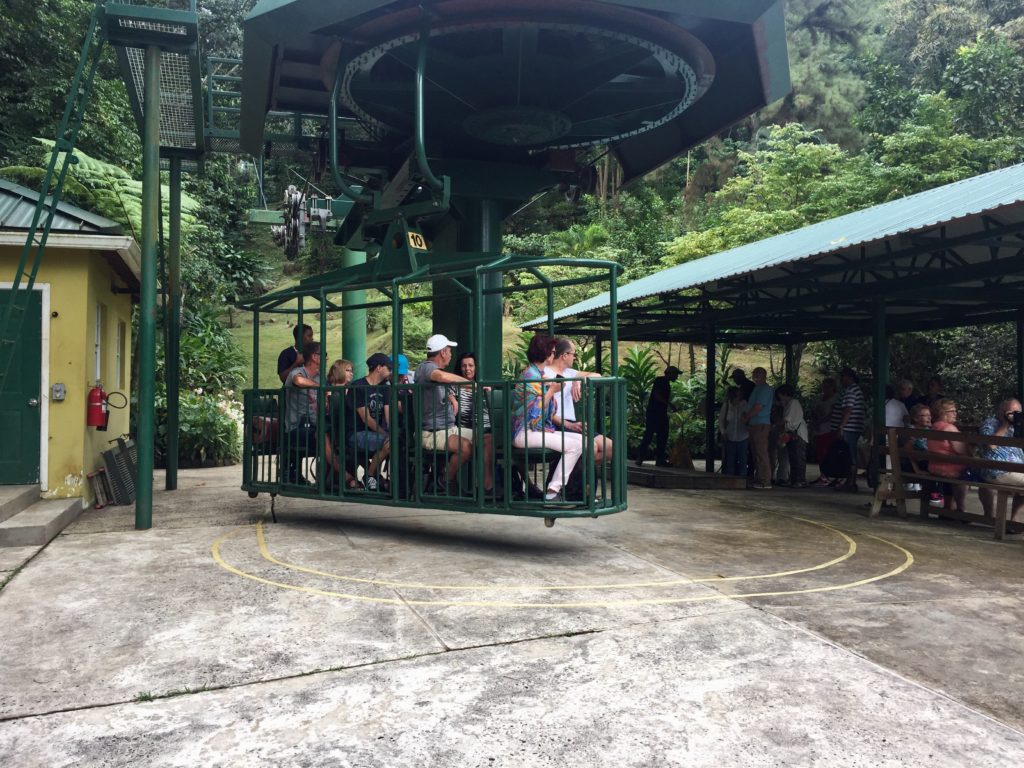 One of the main attractions here is the Aerial Tram, which allows visitors to ascend into the rainforest canopy and feel at one with nature, without having to do any strenuous activity. The specially designed gondolas seat 8 people and a nature guide explains everything you see as you pass effortlessly and noiselessly through the rainforest. This keeps the ambience of this special environment intact. Tours on the Aerial Tram are priced at $80USD per person.

If you would rather something less sedate, you can also experience the thrill of ziplining. You get hitched up to a series of cables and zip from platform to platform high up in the tree canopy. Go out on a limb and take the leap and swing like Tarzan into the web. If your adrenaline isn’t flowing the whole time, a brisk hike to the next set of platforms will juice things up a bit before you zip safely back to base camp. Prices for ziplining tours are also $80USD per person. 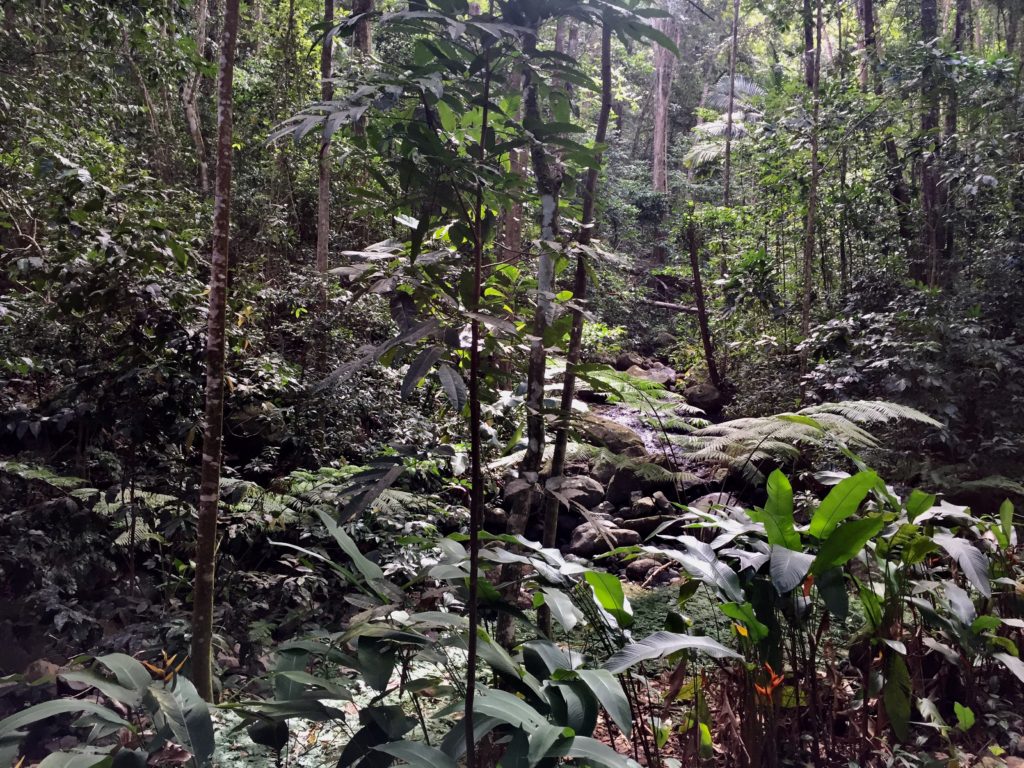 This is also the point where you can venture further into the rainforest on foot, along the Jacquot Trail. Named after the national bird of St. Lucia, the Amazona Veriscolor Parrot, this organised trail will lead you gently into the rainforest. It is made up of mature Caribbean oceanic timberland, powerful chatannier hardwood and strangler ficus. Experienced nature guides will bring the rainforest to life, hiking over gorges and springs, bringing you closer to the native wildlife. You may even get to see the bird the trail is named after. Guided tours on the Jacquot Trail start at $45USD per person and the hike usually takes 3-4 hours. 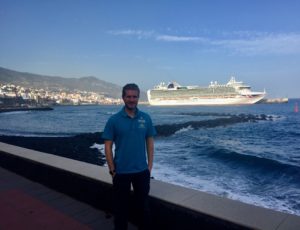 Sam Whiteside grew up by the seaside in Lowestoft, Suffolk but ended up working at sea by chance after a discussion at university with a professor. Having spent his entire ship career in the Shore Excursions department, Sam is currently a Port Presenter with P&O Cruises where he has been for 5 years. He has worked on all the ships in the current fleet.

Sam loves getting out and exploring all the destinations that he visits on cruises and is always excited to try new things and expand his knowledge of the ports. He has recently invested in a new passion of amateur photography, which is great in his job because he has the perfect material to work with on a daily basis. Sam doesn’t have a favourite destination. He finds they all have something special about them, but destinations he enjoys visiting regularly include the Baltic and the Central Mediterranean.

You will find more of Sam’s guest posts about the Caribbean here.