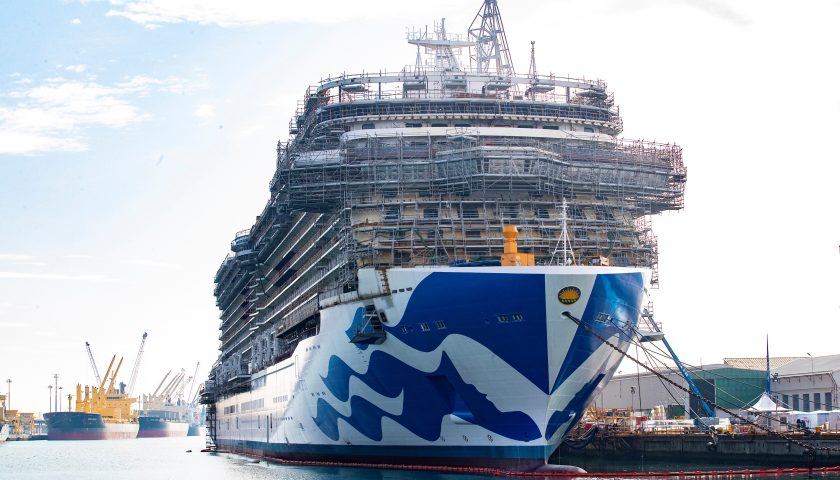 Princess Cruises and Fincantieri shipbuilding company announced today the signing of the final contracts for the construction of two next-generation cruise ships, which will be the largest ever built so far in Italy. Delivery for the 4,300-guest, 175,000-tonne vessels is scheduled for late 2023 and spring 2025 respectively. The announcement follows the initial signing of a memorandum of agreement between the two parties in July 2018.

The ships will be based on a next-generation platform design, being the first Princess Cruises vessels to be dual-fuel powered primarily by Liquefied Natural Gas (LNG). LNG is the marine industry’s most environmentally friendly advanced fuel technology and the world’s cleanest fossil fuel, which will significantly reduce air emissions and marine gasoil usage.

Jan Swartz, Princess Cruises president, said: “Princess Cruises continues to grow globally, adding new ships to our fleet built by our long-time trusted ship building partner, Fincantieri, who brings decades of expertise to these next-generation cruise ships. Even more exciting is that these two ships are being designed to include our MedallionClass platform, powered by Ocean Medallion, the most advanced wearable device available within the global hospitality industry.”

Giuseppe Bono, CEO of Fincantieri, said: “This result proves, once again, the trust we receive from the market, which allows us to look to the future with ambition. It honours our great work focused on innovation thanks to which we have been able to offer to the client a record-breaking proposal not only in terms of size. Besides we firmly believe that a new class of Princess Cruises’ ships, one of Carnival Group’s top brands, can stem from this promising project. In fact, for Princess Cruises, we have received orders for 21 ships, another unprecedented result in this industry.”

The Ocean Medallion is a complimentary, automated piece of technology, the same size as a 10p piece, given to each guest that enables features such as keyless stateroom access and quicker and easier embarkation and disembarkation. Guests can currently experience the Medallion on Caribbean Princess and Regal Princess. By the end of the year, the Medallion will be activated on three additional ships: Royal Princess, Crown Princess and Sky Princess.

Sky Princess is under construction in Monfalcone, Italy. The ship is due to launch October 2019. More information on Princess Cruises can be found here.