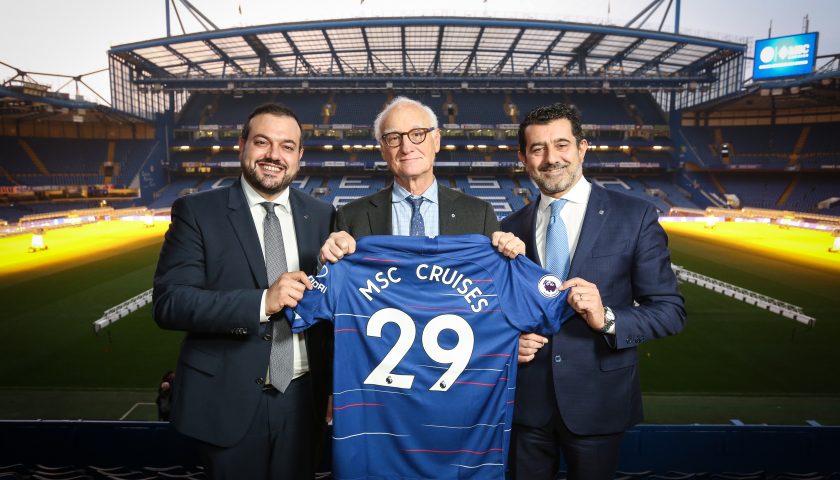 It’s been a week of big announcements for Swiss-based cruise line MSC Cruises. Further to releasing details of the interior of MSC Bellissima yesterday, MSC have just announced that they are to become the official global partner of Chelsea Football Club.

The multi-million pound deal includes, amongst other elements, LED perimeter advertising, VIP hospitality, star player engagement as well as a dedicated digital marketing presence. The deal will commence in January 2019 and will run until June 2021. MSC Bellissima will be the first ship to benefit from the new partnership. Signed Chelsea FC memorabilia will be on display for guests in the British pub on board. In celebration of the partnership, ambassadors from the football club will also attend the naming ceremony on March 2nd 2019.

Gianni Onorato, CEO of MSC Cruises, said: “For MSC Cruises, this is an exciting opportunity to be working with the respected and highly successful Chelsea FC – the brand, as well as the overall organisation. It is part of MSC Cruises’ strategic focus on the UK & Ireland, with the two markets being a key part of the next phase of our global growth plan. It is also designed to build further positive brand association as well as introduce our distinctive cruise experience to new audiences both in the UK & Ireland and globally.”

Chris Townsend OBE, Commercial Director of Chelsea Football Club stated: “We are delighted to announce a partnership with MSC Cruises at such an exciting time for their business. With the imminent launch of their new ship, it is the perfect time to begin our partnership and we truly believe that working together, we can help MSC Cruises to achieve their strategic goals, both locally, in the UK and Ireland, and globally.”

In other MSC Cruises news, the company will be lengthening and refurbishing one of their vessels (as yet unnamed) which will homeport in Southampton during the summer of 2021. Speaking to Travel Weekly, Antonio Paradiso (managing director of MSC Cruises UK and Ireland) announced that the larger ship will sail northern Europe itineraries to the Baltic capitals, Norwegian Fjords and the North Cape. He also said that it will be the first time the cruise line have taken 100% commitment of a ship for the UK market, and the ship will be adapted with British brands to meet the needs of the UK market.

MSC Cruises is currently the leading cruise brand across Europe as well as in the Gulf, South America and Southern Africa. It is currently in the midst of an industry-unprecedented 10-year, €13.6 billion investment plan, which will see 17 new ships coming into service over the 2017 – 2027 period. MSC Cruises has a presence globally and has welcomed over 170 different nationalities on its ships.

You can read more of my posts about MSC Cruises here.