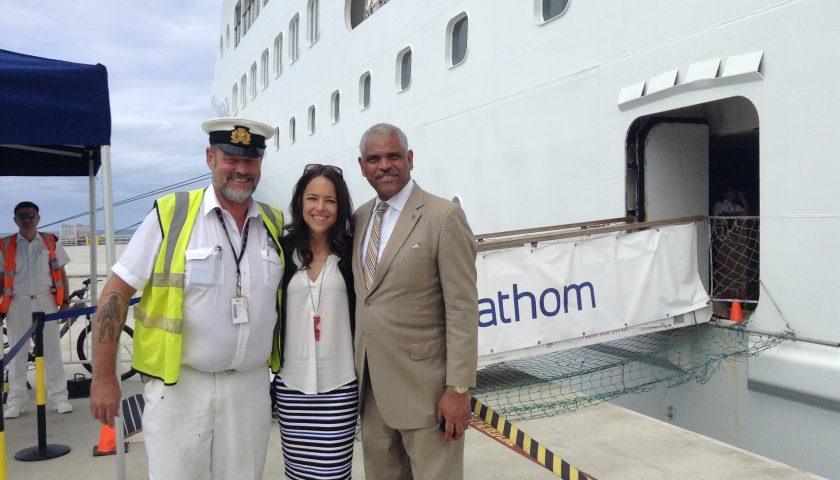 Going on a cruise is the perfect way to relax, unwind and forget about work. But have you ever wondered what life is like for the officers and crew who look after you? Are you curious to know what it’s like to work on a cruise ship?

For my latest officer Q&A, I talked to my friend and former colleague Glenn Cairns. Glenn works as a ship security officer (SECO) for Carnival UK. He may be familiar to passengers who cruise with Cunard and P&O Cruises, as he has worked for these two brands for many years.

Can you talk me through a typical port day as a security officer?

I tend to get up between 0630 and 0700. Bringing the ship in to port is a big team operation. Initially I make sure that the quayside looks safe as we are approaching. Then we open the ‘shell doors’ (where the gangways go) when instructed to do so.

I help position the ship as the captain, or deputy captain, manoeuvres us alongside. As soon as enough lines are ashore, I am instructed to put the gangway out. I am usually the first one on to the quayside.

If the port agent or other officials are there, I will meet and greet them and get them on to the ship. Then I will carry out a security check of the immediate surrounds, looking for gaps in the quayside security arrangements. I also inspect the terminal area.

I then focus on supervising the security team as they set up the gangways. Team sizes vary according to the ship. The smallest I’ve worked in had eight people, while the largest had eighteen. Once I am given the all clear, passengers can start getting off the ship.

The rest of my day will be taken up by accident and crime investigations, port arrival preparation, meetings, drills, disciplinary investigations and other security matters. I try to take a break between 1200-1400.

An hour before departure, you’ll find me at the gangway talking to passengers. Once everyone is back on board, I’ll be the last one on to the ship and the gangway will be pulled up behind me. Then it’s back to the office to check the gangway logs and see whether there are any other issues, such as thefts or accidents that happened ashore.

Which ships have you worked on and how long have you been at sea?

What made you decide to pursue a career as a seafarer?

I live in Cowes on the Isle of Wight and I’ve spent a long time on boats of varying types. I love the sea. My grandfather and uncle were merchant navy officers and I always wanted to work at sea, once I left the police.

Fortunately the post of ship’s security officer became available and the skill set required was ideally covered by my 32 years in the police. The vast majority of SECO’s are ex-police and there are good reasons for this.

What is your favourite thing about working on a cruise ship?

It’s the ‘motion of the ocean’ and the views. I also really like hosting tables and entertaining the guests. I’m a sociable person, so I like to meet and greet and help passengers and crew in times of need. 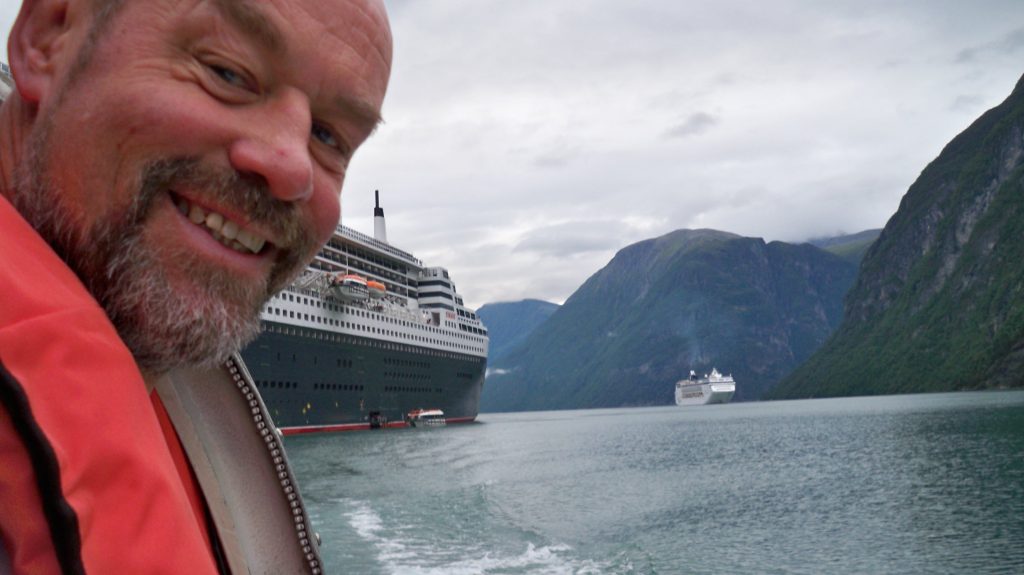 Do you tend to favour working on bigger or smaller ships? How do they differ from a work perspective?

I prefer smaller ships because they are more personable. I get to know the crew more quickly and I can get around the ship a lot faster and it is more a family. It’s the same with the passengers on the smaller ships, as many of them return time and again.

The reverse is true about big ships, plus the volume of work generated for me by 4,500 people is a lot more than 900 people. The work is the same, but the workload is different. For instance, on a big ship you may get five accidents a day, on a small one maybe five a week.

What creature comforts do you miss most when you are away from home?

Well apart from the Mrs (if I can call her a creature comfort), I miss decent TV and being able to eat and drink when I want and what I want!

What ship will you be on next and where are you looking forward to cruising to most?

Queen Victoria. I’m looking forward to seeing the glaciers in South America and other fantastic scenery. I’m also excited about coming back through the Panama Canal again, as I haven’t seen it since it has been widened.

Port wise it doesn’t make a lot of difference, as I won’t be going ashore much because of my job!

What has been your career highlight so far?

You get a lot of famous people on the Mighty Mary, but I got to look after former US President Bush Senior and I worked with the USSS presidential protection team. They ‘coined’ me with the US Secret Service coin as a gift, and the former president gave me a set of cufflinks with his signature on them.

Then there was the Fathom era. I was privileged to be the SECO for the build-up and start of the project. We took the ship to the Dominican Republic with Tara Russell the Fathom CEO and Cuba with Carnival Corporation executives from all the operating brands. I worked closely with security in head office and had dealings with the CEO Donald Arnold. I felt honoured to have been trusted with all that responsibility by my company.

My third highlight happened some time ago when I was a military liaison officer on an unnamed cruise ship. I worked with UK Special Forces, which culminated in a big military exercise involving 250 Royal Marines. The ship didn’t have passengers on board and the exercise details remain classified. I believe that event remains the largest cruise ship exercise ever held. I played a reasonable part in making that happen, but that’s all I can tell you about it! 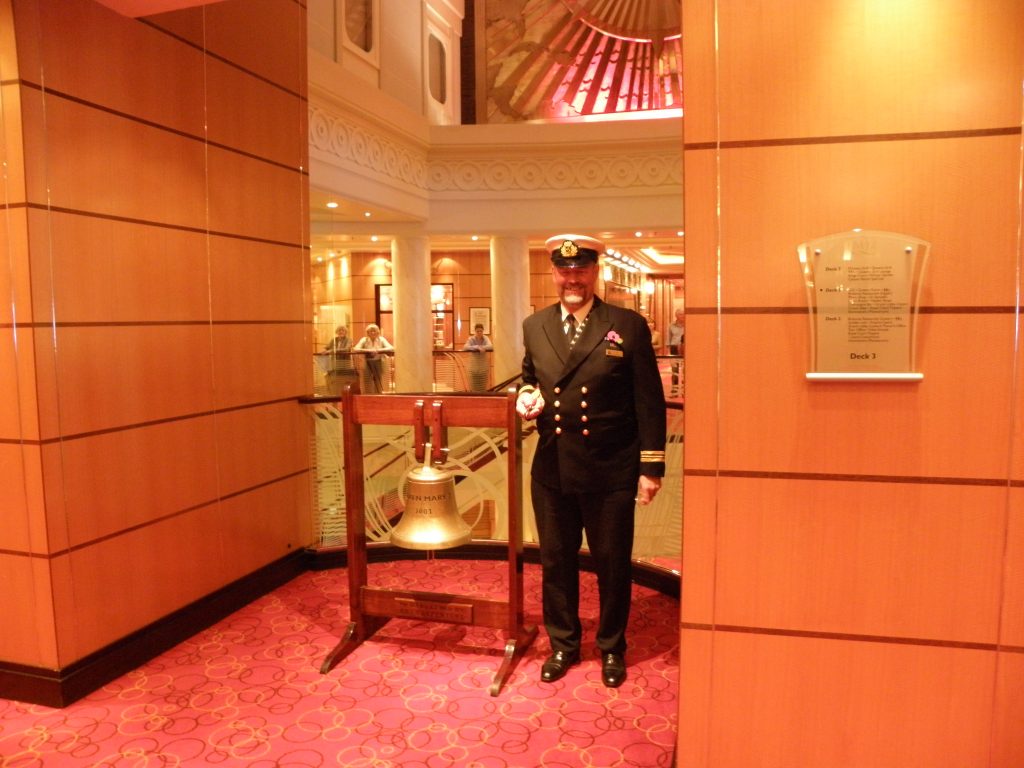 Have you got a favourite port you’d like to return to?

The South Pacific islands edge the Caribbean in my view. Places like Champagne Bay or the Isle of Pines get my vote! The best ports for sailing in and out of would have to be Sydney or New York.

Have you ever wondered what it would be like to work in a ship’s entertainment team? You can find out all about it here.