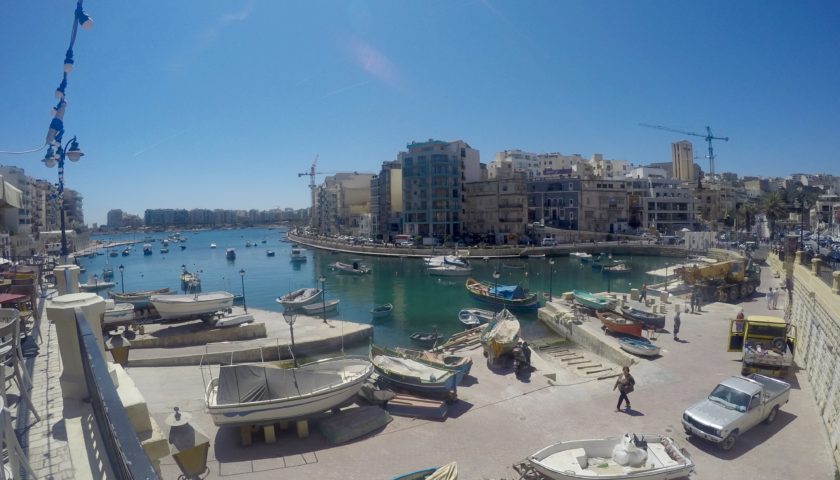 One of the things I love most about cruising is the opportunity to visit a new port every few days. I really enjoy hopping ashore, jumping on a tour or exploring a place independently. But sometimes I want to spend longer than one day in a port, which was the case during a recent trip to Malta.

When my husband and I found out he would be based out of Malta on the cruise ship Oceana last summer, we decided to book a 7-day stay on the island to get to know it better. His role as deputy captain means that he is often busy working during the day, leaving little time to explore the ports. So this seemed like a great opportunity to have a holiday on an island we’d both only visited for a few hours in the past.

We decided to opt for a self-catering apartment in St. Julian’s owned by our friend Dan Camenzuli at DD Lettings. Dan was one of my Shore Excursions managers when I worked at sea, and he is also Maltese, so he was the perfect person to go to find out more about this fascinating island.

We packed a lot into our 7-day stay before joining Oceana (where we continued to visit Valletta every Thursday throughout the summer on the ship). I would definitely recommend spending a few days pre or post cruise if the opportunity arises. Here are my top tips when visiting Malta.

Cruise ships dock in Valletta, Malta’s capital city. Built by the Knights of St John of Jerusalem in 1566, Valletta lies on a small peninsula to the southeast of Malta and it is the southernmost capital of Europe. Its ornate 16th century sandstone architecture, compact but elegant centre and rich history helped it become a UNESCO World Heritage Site. It is one of the most concentrated historic areas in the world, with an incredible 320 monuments scattered across the 137 acres of city centre. The sail into port is incredible and it is worth getting up early to see.

The fortified city centre sits high up on a hill and there are no shuttle buses, so passengers normally walk five to ten minutes to the Barraka Lift, which takes you up to the Upper Barraka Gardens and Saluting Battery. The lift costs 1 euro for a return journey and you pay before getting into it. Taxis are plentiful for those preferring this option.

Alternatively there are two main hop-on hop-off bus companies with different routes, which stop on the main road next to the marina. We bought a two-day CitySightseeing pass, which allowed us to follow two separate routes. If you are visiting Malta for the first time, I would recommend taking the ‘North/Blue’ route if you want to make the most of the island’s main highlights.

Although Malta became independent in 1964, there are still many links to its previous ruler – Great Britain. British visitors are likely to feel at home with Valletta’s plethora of well-known British high street stores, situated in the compact shopping district. Brands include Marks and Spencer, Monsoon and Costa Coffee. The city centre also has many historical attractions such as Castille Palace and the Lascaris War Rooms. The latter contains a series of operations rooms and complex tunnels that were used during the Second World War.

During one of our turnaround days, I walked through the centre of Valletta, down to Marsamxett Harbour where I picked up the Sliema ferry. The ferry cost €2.80 for a return and the journey takes around 15/20 minutes (departing every 15 minutes). The town of Sliema lies directly opposite Valletta and, in my opinion, has better shopping facilities than the capital. The pretty seafront is peppered with tall apartment blocks, lively cafés and restaurants. It is one of the most popular tourist areas on the island.

When you get off the ferry, turn right and continue walking all the way round the harbour. On your left you will see the main shopping street (with high street store such as Next, Matalan and Oasis). If you keep walking around the harbour – past the numerous cafés and bars – you will come to an enormous shopping centre called The Point. This is a great place to spend some time and you’ll find a number of well-known designer and mainstream stores, such as Debenhams, Tommy Hilfiger and Nike. Just outside The Point, there is a pretty modern square with upmarket restaurants.

Sliema has a number of beach clubs, which you can access for a fee. Malta isn’t really a beach island, so beach clubs serve as the next best thing. Most will feature one or two swimming pools, sun loungers, café facilities and access to the sea.

You can walk to St Julian’s from Sliema, or visit it on a public bus or sightseeing bus route. The area is very lively, with a number of trendy restaurants centred around the pretty Spinola Bay. We really enjoyed having breakfast at Cuba, a waterfront bar that served brunch dishes and delicious pizza. There are a number of delightful restaurants along the harbour’s edge, close to Cuba, that are also worth checking out.

St. George’s Bay is a golden sand beach located a ten-minute walk from Spinola Bay. This is a bustling area with lots of bars and nightclubs, but the beach can get very busy. The area is also home to a number of large resorts.

You cannot walk to the fortified medieval town of Mdina from the port, so transport is required. Formerly the capital of Malta, this ‘Silent City’ has very few cars and is incredibly quiet, save for residents, day-trippers and horse and carriages. A network of intricate, winding streets, centre around the impressive Cathedral of the Conversion of St. Paul. Mdina sits on a large hill and visitors can soak up magnificent views of the surrounding area from the top of the fortification. Aside from Valletta, the town has some of the best examples of sandstone architecture in Malta. There are plenty of restaurants serving traditional Maltese cuisine and you’ll find a number of shops selling the famous Mdina Glass. I found that the glass was cheaper to buy in Mdina, than it was in the cruise terminal. Sadly I lost my photos of Mdina when my phone decided to break!

This historic fishing village located to the southeast of the island, is by far one of the prettiest parts of Malta. Unfortunately we visited on a Sunday during market day, which was unbelievably busy. The sightseeing bus was packed and all of the bars and restaurants were full. I hadn’t seen anything like it for a long time. Luckily, Dan and his girlfriend Terri took us back to the village for dinner when it was much quieter. You cannot really appreciate the beauty of the place when it is so busy, so going back in the evening was a real delight. The cosy seafood restaurants and pizzerias had tables and chairs along the waterfront overlooking the tranquil harbour, which had a sleepy feel to it.

Marsaxlokk has lots to see during the day. As well as a quieter market that runs daily from Monday to Saturday, other key highlights include the 19th century church, boutique shopping and a number of quiet, isolated coves that rarely get busy.

Popeye Village is a themed attraction built around the set of the 1980 Robin Williams Hollywood film – Popeye. Located in northwest Malta, this unique site is strangely fascinating but also quite baffling! Visitors can meet a number of Popeye characters (actors in fancy dress), they can go inside some of the buildings and watch clips from the film.

There are some other highlights I must mention that you may (or may not) have time to explore. Malta’s neighbour, Gozo, is a small island that is accessed by a ferry from the northwest of Malta. The ferry terminal takes a while to get to from Valletta, so this is not a journey I would embark on unless you are staying on the island (or are on an excursion). Gozo’s key highlights are the Azure Window, the Church of St. John the Baptist and the Ggantija Megalithic Temples. The island also has some pretty beaches with some great dive sites.

Malta’s other neighbour is the island of Comino, a paradise for snorkelers and scuba divers. This too can only be accessed by small boat or ferry. Facilities are extremely limited and there is only one hotel on the island.

Things to know in advance

It might sound obvious but Malta can get extremely hot. From June until August, we experienced a very dry heat as well as a heat wave that lasted several weeks. On several occasions passengers refused to get off the ship because the weather was so warm. Make sure you take plenty of water, sun cream and a hat ashore.

Maltese is the main language, but the majority of nationals speak English very well. Everything is written in English, from bus timetables and street signs to menus and shop frontage. You will see a number of famous British brands such as Marks and Spencer, Next, Dorothy Perkins and George (ASDA).

Malta has an exceptionally well-organised public bus system that is cheap and easy to use. Many cruise ship passengers used the bus system to get around, as all timetables and routes are in English. The central bus station is a five-minute walk from the Upper Barraka Gardens.

Eating out in Malta

There are a number of local delicacies in Malta, and you will find rabbit, Kapunata (a type of ratatouille) and fish on most menus. We loved trying the local beer, Cisk which was delicious and inexpensive. Eating out in Malta is relatively cheap, depending on where you go.

I found the best free Wi-Fi in the Marks and Spencer café situated on the main square. It is free and reasonably fast. Costa has Wi-Fi too, but I found the connection to be quite slow. The Hard Rock Café on Valletta waterfront (right next to Oceana’s berth) had decent Wi-Fi, but the bar did get very busy with passengers and crew. You can find out more about visiting Malta on the official tourism website Visit Malta.

If you enjoy my blog and you have a couple of minutes to spare, please consider voting for me under the Best Cruise Blogger category in the Cruise International Magazine Awards. You can find the nomination form here.

You will find more of my destination guides on the Port Guides section of this website.

Here is some coverage by @shipmonk of Saga’s #SpiritofAdventure and our friend Kim, her captain. https://t.co/pzQ0dbH9Xm
View on Twitter
0
2

Don’t miss these guys on the The One Show next week. https://t.co/uWzmBAR4aM
View on Twitter

Cruise with Ben & David @CruiseWithBD
We are SUPER excited to tell you we will be appearing on the BBC One Show next week (Tuesday 13th October) 😃 We visited the Ghost Cruise ships last week to film a segment! It was such a fantastic experience!! https://t.co/UY5keUOXi0
1
12

Hi I'm Anna, a 34 year old blogger from the UK. I am a former seafarer, avid traveller and I am married to a former cruise ship deputy captain. I originally set up this blog to chart my travels as a thirty-something sailing with my husband on cruise ships, but now I write about all things cruise related. Whether you are a new or experienced cruiser, I hope you find my advice a useful aid when planning your next holiday. Read more...

Make sure this account has posts available on instagram.com.

Share
This website uses cookies to improve your experience. We'll assume you're okay with this, but you can opt-out if you wish.Accept Read More
Read more
Necessary Always Enabled